Collards and Cornbread (And Why I Became a Cook)

Last week, I had a very big man approach me in the kitchen, only to point out that I make cornbread and collard greens.

“Now I see here, it says you make corn bread and collard greens?”

I know where this conversation is going.

“…my grandma taught me how to make the BEST cornbread and collard greens – I’m gonna come down one day and we can compare — see which one we like better!”

At this point, I’m laughing. Because that’s what I do when I sort of don’t understand a situation. I smile. I laugh. I say okay.

He was a sweet man. A preacher, actually. He gave me his card. He preaches twice on Sunday…like all them good Baptist preachers do. I don’t think he’ll be back any time soon, but it’s always fun connecting with people over food, even if they claim to have the best. I never claim to make the best of anything. I cook food based on a memory. Based on how a certain dish made me feel at some moment in time. It’s nostalgic, at best. And I cook a dish the best way I know how, until I learn a better way.

I am not stubborn, and will humbly lay down my knives to be shown how something can be done better.

But this is something I’m learning in this weird, competitive business. The best this, and the best that. This recipe handed down for generations…

You see, I don’t have those things. I have a few recipes handed down, but I wasn’t raised in a kitchen. I think I began cooking for myself younger than some, but by no means do I have a heavy culinary background. Food is important to a lot of cultures, but obviously the South is held in high esteem.

Most of the stuff I cook now, I would have never eaten as a kid. Sometimes my mom will say, “Can you believe when you were a kid you wouldn’t touch beans and rice!” And I didn’t really, unless it was smothered in ketchup, served with some Popeyes. I mostly wanted McDonalds. Wendy’s. You know…kids are stubborn a lot. 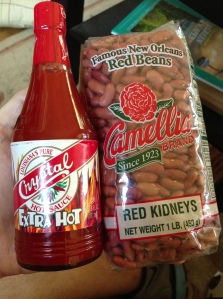 Someday, part of me really wants to say, “Well, I was raised in kitchens…my so and so was a cook and I watched them..” But that is not what really happened.

I started cooking because I really wanted to be good at something and I wanted to connect with my culture. I was feeding two people. And I was tired of frozen chicken breasts coated in Tony Chacheres’ and just barely making something taste delicious.

It is something I miss, deeply. Connecting with another human being at a table is a rich experience.

At least, that’s what cooking is to me.

But also, I started cooking because I was living with another who loved to eat, and valued its place in our lives. Now that things have shifted, I am left many nights, fumbling around with what works for one person. People tell me it’s hard to cook for other people. I get that. But sometimes it’s harder to cook for one.

I’m not quite sure where it was I originally planned to go with this. But it is here, now.

And what I want to say, is that I became a cook because of you. You know that, and I will always have that. And it will always be mine to give.

I don’t make the best cornbread or collard greens. I like it, but it’s probably not the way you had it when you were a kid. And that’s okay.

You should know when I cook, I have all these other people to feed now.

And I see them come in and take off their coats. And smile and we wash their empty plates. We have given them an experience.

Those nights, when I’m here alone, figuring out what to feed myself, all I really care to think about what is what I can give them. (And where all of this will take me.)

because it all started with you.